Mark Hewitt Pottery > Carol's Articles > Proud to be part of POTTERY on THE HILL!

Proud to be part of POTTERY on THE HILL!

Once a hospital
In 1864 – the same year that Congress mandated funds for Arlington Cemetery – Abraham Lincoln commissioned $25,000 for construction of Washington, DC’s first Naval hospital, just blocks from the Capitol. The hospital’s first patient was 24-year-old African American seaman Benjamin Drummond, admitted in June 1866 with a gunshot wound to his leg that he received in battle three years before. For 40 more years the hospital continued to serve sick and wounded seamen, when it moved to a newly constructed facility, “the New Naval Hospital,” which was later replaced by the Bethesda Naval Hospital in 1942.

From 1907-1911 it housed the a school where sailors learned nursing, hygiene and anatomy. From 1911-1922, it was used to care for veterans of the Civil and Spanish-American wars, as an emergency hospital, and for a time, the headquarters of the Naval Reserve. And from 1922 to 1963, it was the Temporary Home for Union Ex-Soldiers, Sailors and Marines, a private institution providing lodging for veterans pressing pension claims in the capital. For another 3 decades the Old Naval Hospital housed several social service organizations and was the headquarters for the effort that established Martin Luther King, Jr. Day. But the facility was not properly maintained and the effects of age and moisture steadily took their toll. After 1998 the main building stood essentially vacant, while the carriage house was rented as an administrative office by a citywide organization providing addiction treatment and counseling.

A Call for Rebirth

In 2000, a small group of neighbors founded the Friends of the Old Naval Hospital to see the place properly restored, to see it turned over to an appropriate long-term occupant, and to research the history of the site and the people who have used it.

As a result, in 2002, a diverse coalition of Capitol Hill neighbors organized the Old Naval Hospital Foundation. With input from hundreds of Hill residents, the ONHF developed a comprehensive plan for the site’s reuse as an educational center for children and adults and a gathering place for community residents. In just over eighteen months and at a cost of $10 million, the facility underwent a major, historic renovation, bringing the structure back to its original appearance, adorned in its original colors and surrounded by its monumental wrought-iron fence. This new building incorporates many 21st century upgrades, such as a fully ADA-accessible design and a green footprint, with its heating and cooling system supported by 32 geothermal wells.

Over 150 years after its inception, and after the rehabilitation, the Old Naval Hospital, a landmark of the Capitol Hill neighborhood, is thriving as Hill Center, a vibrant, campus-like center for cultural enrichment, lifelong learning, and civic engagement.

(the above is paraphrased and edited from the Hill Center website)

Pottery on the Hill Annual Show & Sale
Since 2012, the Hill Center has also been home to the annual Pottery on the Hill show and sale. Each year twenty of the best ceramic artists in America were invited to show their work. Some gave demonstrations, and attendees came from the DC are and beyond. Pottery on the Hill features functional pottery, pots meant to be used in everyday life. Whether you are looking for a unique holiday or wedding gift, hope to decorate your home with one-of-a-kind items like platters, vases, serving bowls or dinnerware, or even just want to upgrade your coffee cup or beer stein, you will find an impressive collection of handmade pots at Pottery on the Hill.

This year, the Pottery on the Hill show goes virtual. No need to trek into DC to see and purchase this fabulous pottery!

Beginning at 5 pm Eastern time on November 13th, 45 potters will open up their individual webshops for you to access some of the best pottery in the country.

To celebrate we will be having a special Mark Hewitt Pottery on the Hill VASE SALE! From November 13 -15, all vases on our online webstore will be reduced by 10% if you use the Discount Code POH2020!

Pottery on the Hill is also thrilled to announce a silent auction from November 5-15, to benefit Hill Center at the Old Naval Hospital, the physical home of Pottery on the Hill. Participating potters have generously donated a piece of their work to be auctioned off to support the work of this arts and cultural center.
Click here to bid! 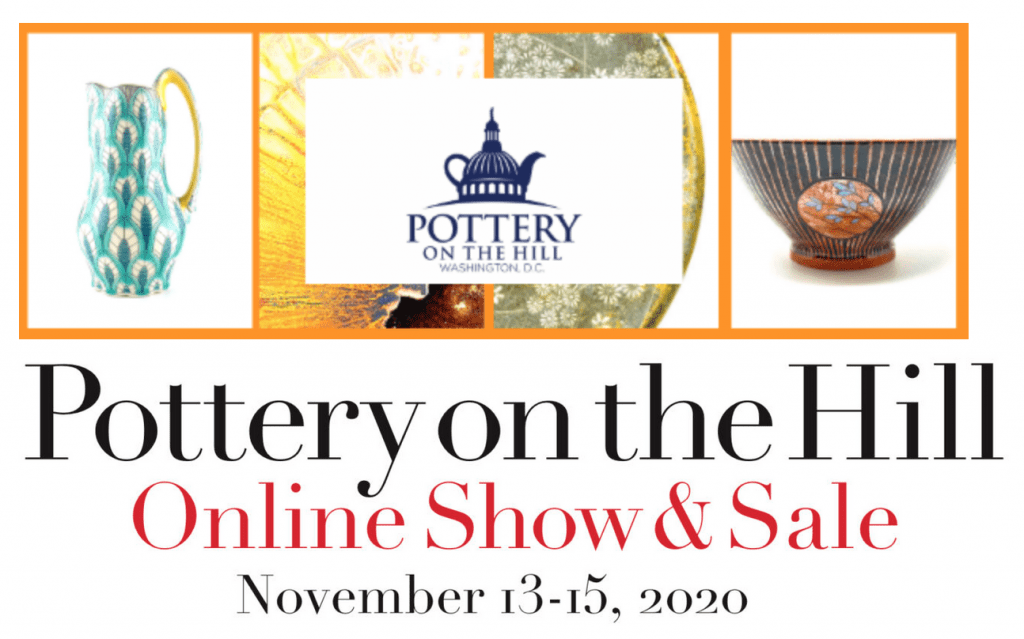