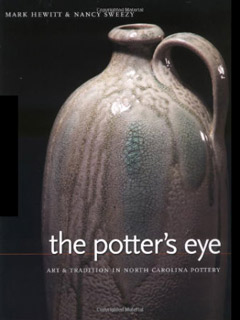 The Potter’s Eye: Art and Tradition in North Carolina Pottery is a catalogue/book from the exhibition at the North Carolina Museum of Art, Raleigh, NC, October 30, 2005 – March 19, 2006.

Published by UNC Press and written by Mark Hewitt and Nancy Sweezy, with photography by Jason Dowdle. The book is available in hardcover with 235 color images throughout its 296 pages.

Read the review in Ceramics in America (2006)

March 2014, “Where are the Studio Potters?” – Notes by Mark Hewitt for the panel discussion at the National Council for Education in the Ceramic Arts (NCECA), Milwaukee, WI.

October 2012, “Sweetening the Pot: Reviewing a Resilient Tradition” – essay by Mark Hewitt for Traditional Pottery: Back to the Future, a Symposium, Mint Museum, Charlotte, NC

January/February 2012 Ceramic Review 253, Mark Hewitt, “A Colony of Dreamers: Mark Hewitt reflects on his journey from Stoke-on-Trent to North Carolina.”

Summer 2010, “Mark in Place” by Henry Glassie and  “Portrait of the Artist as a Young Man” by Tanya Harrod – essays for exhibition catalog for the “Mark Hewitt: Falling Into Place,” at the Duke University’s Nasher Museum of Art

March 16-19, 2005, “Apprenticeship: An Educational Alternative –Who’d be a Potter?“, at the 39th Annual NCECA Conference (National Council for the Ceramics Arts), Baltimore, MD

April 1991 Ceramics Monthly, cover article, “The Making of a Potter”